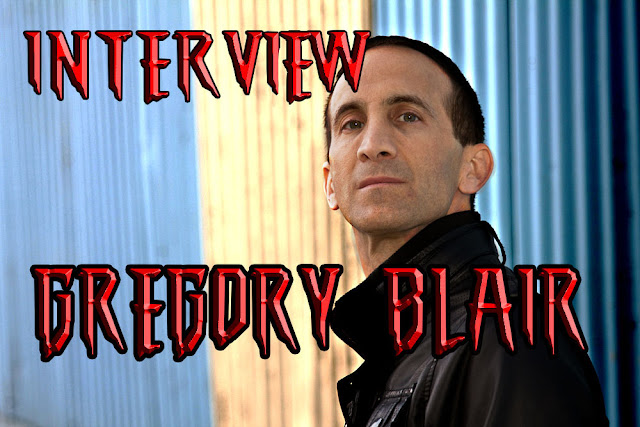 Director, writer, producer, actor, what else? Yes, a talented and visionary artist who is constantly seeking inspiration, his muse to create another movie in which he surely could either act or produce or direct or all in one. With a great amount of movies as an actor. He has two feature films as a director; DEADLY REVISION and the upcoming comedy/horror and very awarded GARDEN PARTY MASSACRE. Gregory Blair gave us some of his free time to chattering about his career, insights, future projects and obviosuly. GARDEN PARTY MASSACRE whose has received multiple awards across biggest indie horror festivals recognizing the quality of this films and the fantastic cast it stars the film. I hope you would enjoy it,


EFF: Thank you very much for accepting my request and letting me talk to you. Where are you from Gregory?
GB: I am a Southern California native, born and raised in the southland!
EFF:  Actor, Producer, Writer, Director and many other things! When and how did you realize that you wanted to work in the film industry?

GB: I think it was in me from very early.  I loved film and theater and was always trying to get involved in both.

EFF: You started out in acting, right? What can you remember from your first time on stage?

GB: My first time on stage was in a play and I was so young, all I remember is we had bits of paper in our pockets which we threw into the air at one point to create a sudden snowfall.

EFF: Ok, Horror is our thing, so, what was your first work in the horror genre, either as a director, actor or writer?

GB: Well, I made some horror movies as a kid and wrote a lot of horror fiction (prose), but I think my first professional horror film was Zombie Strippers.  I was a zombie (not a stripping one!); I got covered in fx make-up and blood and you’ll never recognize me in it. 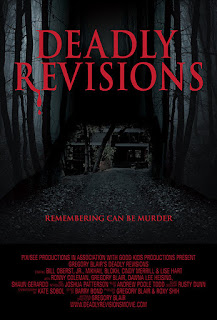 
EFF: Your first horror film as a director was Deadly Revision in 2013.  What did mean to you that experience ? In addition, how did you end up shooting it?


GB: It was a bit of a snowball effect. I had the script and the lead actor and was looking for a producer and a director. Roxy Shih loved the script and wanted to cut her producing teeth and she suggested I cut my directing teeth. So, we busted our cherries together making the movie ourselves. It wasn’t what I intended at the start, but I wouldn’t change it for anything.

EFF: Garden Party Massacre is your upcoming movie, a horror-comedy, right? First off, what made you do a horror film and decide then to mix up comedy with horror and when is gonna be out?

GB: I wanted to do something totally different from DEADLY REVISIONS.  Partly to show my range, but also because I love broad comedy and, if you think about it, the heightened emotions of horror and comedy are actually not dissimilar.  That’s one of the things that makes horror easy to spoof. But the movie pokes fun at a lot of genres, fans, and all sorts of stuff.  The film will be available on DVD and BluRay later this year--hopefully by the end of fall-- through SGL Entertainment.

EFF: Written, produced, directed and even you act out, what a participation! How was the creation process? When did you start to visualize the story and also the budget was held by you or you pitching it?

GB: The writing came first.  I thought of the title, it made me chuckle…and I had to write the story.  In addition, I always knew I was going to direct it. Then I started talking to actors to put a package together.  Once I had the cast, it was about money. We went in a few directions on that, but the idea was that the film was happening, one way or another; I conceived it to be very low cost, so I knew we could do it no matter what. 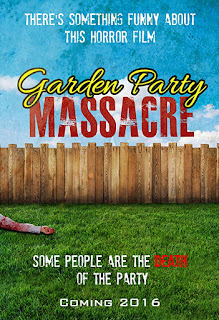 EFF: How did you handle over the casting process?

GB: I cast some actors based on the reading, others I knew I wanted once I had the script.  I like to work with people I know are talented and professional.  No flakes or divas on my sets, thank you!  The only real unknown was Matt Weinglass and after we talked to him, we knew he was the man.  It should be no surprise that now Matt and I are friends and I’d work with him again in a heartbeat.

EFF: What kind of setbacks you had to overcome on shooting the film? OR during the pre or postproduction.

GB: The usual production sound issues: planes, alarms, etc.  It doesn’t matter how quiet the location is, if you’re outdoors, the noise will find you once you call “Action”!  Oh…and the mother of one of my actors was rushed to the hospital one day.  That was tough.

EFF: Any anecdote from the making of the movie?

GB: The backyard we used was not used to having so many people trudging all over the grass, so it was dying and nearly all dead by the end of the shoot.  It was tough because the ground was more featured in the scenes scheduled for the end of the shoot.  So, we had to shoot around it the best we could. By the last day, we only had a small patch left…and it’s featured in the final scene of the movie!

EFF: Gregory, what thing do you like to do more, acting, producing, directing or writing?

GB: I love elements of them all.  But I think I was born an actor…and the rest all came from that.  Writing dialogue is like acting on the page, directing is cinematically expressing ideas and emotions (which is similar to acting) and producing is acting like you’re a grown up who knows what he’s doing (and hopefully does it)!

EFF: Why people should buy your movie?


GB: Because it’s really funny and everybody loves a good laugh. The world can be a harsh, dissatisfying place sometimes and this film will always be a great pick-me-up to make you feel better. 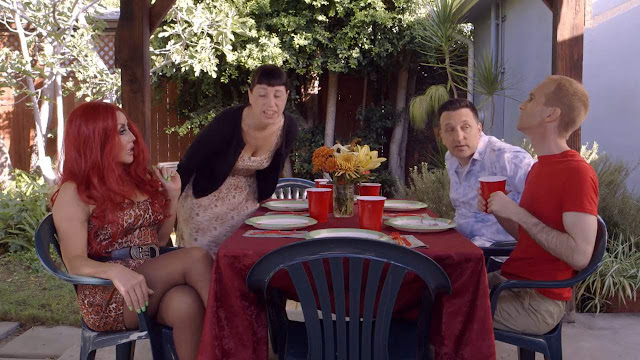 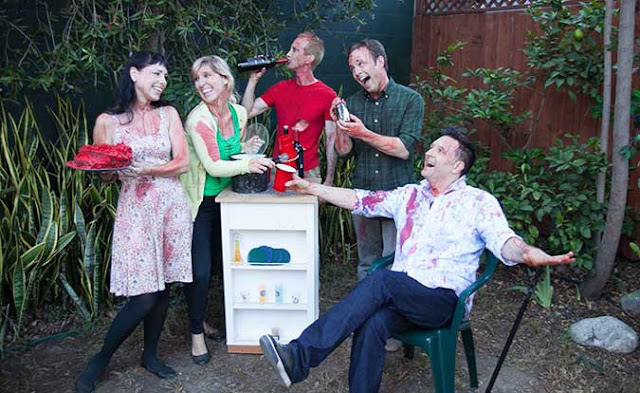 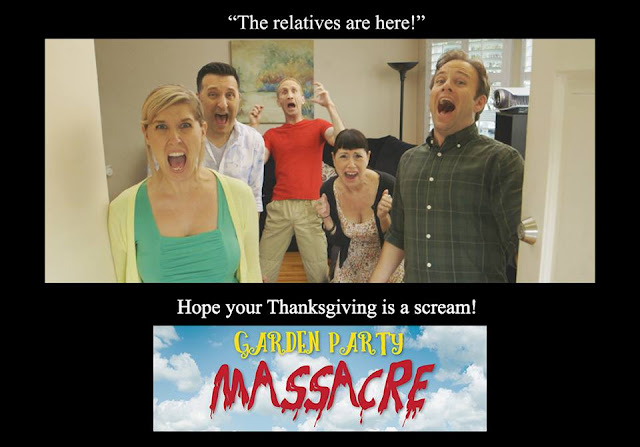 
EFF: What works where you act out will be about to be released out soon?

EFF16 Describe your film in five (or less) adjectives?

GB: Hilarious, Zany, Brilliant (I stole all of those from actual reviews!)

EFF: What cameras, equipments did you use in "Garden Massacre Party"?

GB: We used two Canon C300s, lightweight dolly tracks, and a jib and a Steadicam for two special shots. 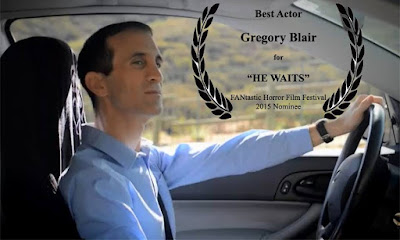 EFF: What advice would you give to newbies filmmakers who are undecided about how to do a film?

GB: Just start making stuff.  On your phone, if that’s all you have.  Watch how-to videos and practice.  The internet is your friend, teacher, mentor…and audience, too.

EFF: What is your directional style in the moment to shoot? I mean, maybe you take some methods as references at the moment to do certain things.

GB: It’s always a combination of carefully calibrated organization…and then working with what organically happens in and around that.  All of the mutable elements (actors, nature, etc.) will create magic within the frame you’ve set up, if you let them. So, once I’ve got everything set, it’s play time. I think most people would say I’m a fairly easy-going director, but that’s because I have everything so planned out that I can relax and enjoy (and direct) the magic. 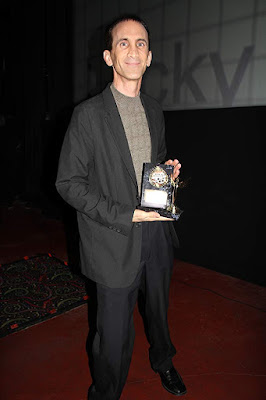 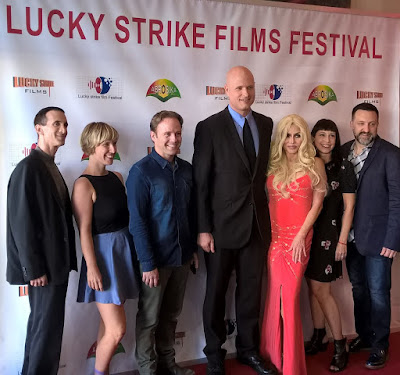 EFF: Are you a horror fan? What horror movies you like the most?

GB: I do like horror.  I prefer scary as opposed to gory: repulsion is not horror to me; I want to be scared/thrilled. So supernatural and creepy will always win over body horror and slashers.  But I love some very bloody films, too, so it really depends on the story more than anything else. John Carpenter’s “Halloween” and Hitchcock’s “Psycho” are both great slasher flicks, but there’s really very little blood on screen; you just think there is. That’s great filmmaking.

EFF: If somebody gives you the chance to make a horror remake, what would you choose and why?

GB: “Hush, Hush, Sweet Charlotte”.  The movie scared the heck out of me as a kid; I had to keep turning it off! Watching it as an adult, I think it tips its hat too early and has some tangential stuff I’d lose.  But the creepy horror story at its core is wicked!

EFF: What is it new in your career now?

GB: I’m scheduled to shoot two films so far this year: Dusting Ferguson’s “Robowoman” and Nick Hunt’s “Safe Place”…and I’m signing on to a new film for Deftone Pictures that will shoot next year.  I’m also looking forward to “Heretiks” coming out, which is based on my screenplay.

EFF: As an indie filmmaker, if a newcomer filmmaker would ask you about what camera should buy or accessories to make an indie film with low money, what would you recommend him?

GB: I’d say don’t worry about equipment as much as telling a good story with good actors.  If you don’t have a good story to tell, nothing else matters. Great movies are shot on phones, nowadays, so the camera is less important than the script and the actors.  I’ve been in films with the biggest, best cameras all the way to phones cameras…and only the story ever really matters at the end of the day. Get whatever you can afford to shoot on and start making movies! 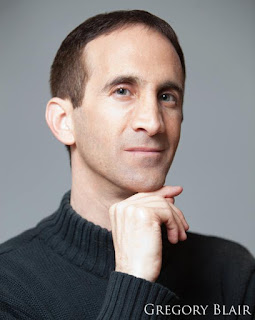 Posted by Elderfanfilms at 7:52 PM 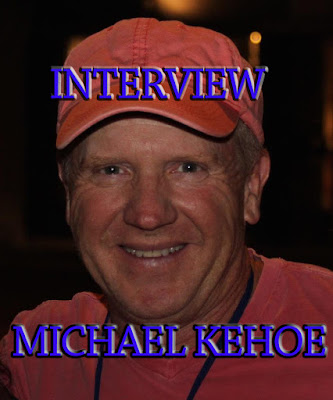 I WILL GO FOR YOU